Established June 2015, the Nashua, NH-based Vertical Spirits LLC is “dedicated to developing premium spirits that embody the company’s ‘Spirit of Adventure’ mission,” the company says in a press release.

After a trial introduction in New Hampshire this spring, Nautical Gin debuts this summer in Massachusetts and Rhode Island, followed by New York, New Jersey, Maryland, Georgia and Florida later in the year.

Packed six to a case, it is expected to retail for approximately $33 per 750-ml. bottle.

Nautical Gin is an American premium gin infused with 15 unique ingredients, including a rare coastal botanical, the company says; it delivers a subtle and appealing hint of sea salt.

The citrus-forward Nautical Gin also contains coriander, lemongrass, elderberry, spearmint and allspice, among others. Quadruple distilled, the gin is made in the Berkshire Mountains of Massachusetts.

Nautical Gin is presented in a simple, modern, aquamarine bottle with a rose-gold capsule. In keeping with the marine theme and reinforcing Vertical Spirits’ mission, the front of the bottle prominently features the tagline “Inspired by Exploration.”

Vertical Spirits already has a second introduction in the works — a completely new brand in a different spirits category — targeted at younger millennials, the company reports. 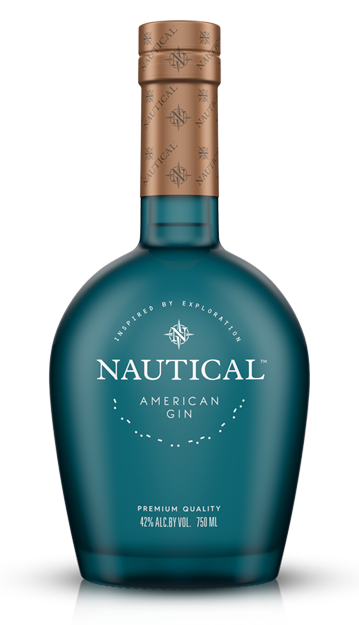